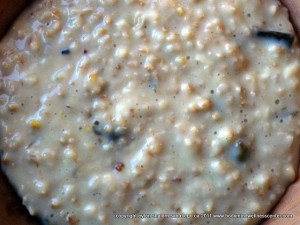 Diet and Nutrition in Chinese Medicine: Nourish Kidney Yin and Cleanse in Winter with Sea Veggies

Winter and the Kidney Qi in Chinese Medical Theory

In winter the Qi enters the Kidneys, the physically lowest of the Zang/Solid internal organs, and the energetically deepest. Energetically deepest because the Kidneys are the root of all Yin and Yang in the body, and as such governs growth and development from conception, but also reproduction after puberty. Grow, development, and reproduction are very deep foundational aspects of the body’s energy, and in the case of reproduction this means that the Kidney’s Qi is fundamental to the deepest levels of the menstrual cycle, to the uterus, the ovaries, and the testes. The tissue associated with the Kidneys is the bones and the marrow of the bones. This is deep stuff in the body. This is why bone broth and bone marrow soup nourish the Kidneys. Any food that is deeply and profoundly nourishing to the body nourishes the Kidney Qi. Saying that a food, like Goji Berry or Walnuts, for example,  nourishes the Kidney Qi is really shorthand for saying that it is deeply nourishing.

The aspect of the Kidneys that relates to heat, movement, activity, and growth is the Yang aspect. This includes both the very  yang hormones of the adrenal glands, like adrenalin, but also the hormones substances like testosterone, progesterone, and the hormones secreted in the pituitary and thyroid glands and within the adrenal-ovarian axis. The aspect of the Kidneys that involves storage, repose, the solid material and health of these organs, the restrictions a healthy body-mind puts on over-secretion of hormones such as you see in cases of “adrenal exhaustion” is the Kidney Yin. Kidney Yin is to Kidney Yang what the candle wax is to the flame. When you burn the candle at both ends through overwork and overstress, the wax is exhausted and now there is no fuel for the flame and the flame goes out. This is the pattern found when healthy people who have been hyperactive suddenly start getting sick. This is a disease pattern of an overly Yang lifestyle pattern with the cell phone in the bed, being checked at meal times, a mind that never becomes still, over work, and excessive amounts of stimulants like coffee, sugar, and drugs such as cocaine or amphetamine.

It is the Kidney Yin that gets nourished and fed by the energy of the Winter months when the land is cold and still, (Yin is cold) and the energy of the trees and plants recede into their roots and the nights are long and days are short. And Yin is to Yang as a candle is to a flame. So its the accumulation of Yin in the Kidneys in Winter that allows for all of the Yang functions of metabolism and activity that enable us to function. This is Winter is a natural time for rest, for going to sleep early, for example.  Its easy to see why the ancient Chinese associated winter with the Kidneys, because in a sense the deepest levels of the body energy is governed by the Kidneys, like the bones and their marrow,  just as in Winter the earth energy recedes to its lowest level where it is stored and replenished before the bursting out in the leafy and flowery explosion  of Yang energy outward that happens in Spring and Summer.

In Chinese medical theory of the five phases or transitions, the salty taste is associated with the Kidney Qi and with Winter. This is the flavor found of course in salt, but also in plants and animals that live in salt water like ocean fish, and even more so in foods that live in the darker recesses of the sea like oysters, mussels, scallops, and shrimp, but also in sea vegetables like Wakame, Kombu and all the various kelps and sea “weeds.” Like the Kidneys in the body, these plants absorb minerals from their surroundings. In Japanese culture sea veggies are considered very detoxifying, and it is suggested that they are good for clearing heavy metals from the body. In Chinese medicine they are used to decongest the lymphatic system and  for the kind of swollen lymph nodes and tonsils that children and teens get especially, with colds and flu. It is interesting, because colds and flu and throat infection and bronchitis involve the development of both pathological heat and damp in the body, with fever, inflammation, redness, swelling,  and discharge. And sea veggies are considered cooling of this pathological heat,  and because the salty taste is softening, good for decongesting pathological dampness from the throat, lungs, and lymph.  It is for this reason, too, that sea veggies are used to dissolve lumps like cysts and goiter. I always recommend sea veggies when I treat cystic acne with nutrition and Chinese Medicine, for example

1 three inch piece of Wakame or One tbsp Wakame flakes

Milk of your choice, to taste, start w/1 cup

Soak oats and wakame overnight in water, or even for an hour. If using rolled oats not necessary.

Add spices to oats, bring to a boil, lower to a simmer and cook till mushy.

Add  milk of your choice, I like to  use  Eden brand soy milk or fresh goats milk. Coconut milk also works well as does any nut milk

No additional salt is needed.

You dont really taste the sea weed in this dish, but you know all it goodness is entering your force field!