by Eyton Shalom | May 12, 2014 | Acupuncture Articles, Acupuncture in the Seasons and for Prevention, Chinese Herbal Medicine, Dosha, Dry Needling | 0 comments 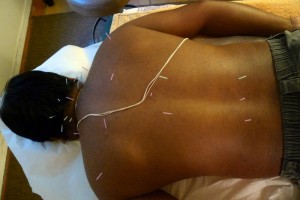 Acupuncture and Dry Needling  for  Vertigo and Headache

Vertigo and headache treated with dry needling and classical Chinese acupuncture combines the best of two worlds– the “dry needling” de-activation of anatomically described trigger points and stimulation of motor points, with the manipulation of Qi and Blood through the related  Acupuncture Channels as described in Classical Chinese Medicine. But there is more to medicine than the mere physical.

“Where this is stagnation there is pain and where there is pain there is stagnation (of Qi, Blood, and Fluids)” so says the ancient classics of Chinese acupuncture theory. They also say that, “the mind leads the qi.” These two pithy aphorisms describe quite accurately how myofascial pain develops.

Myofascial pain and  trigger points are the result of the stagnation of energy (note how good you feel after exercise, stretching, acupuncture, or massage, when the flow of Qi has been moved or opened) associated with tight, shortened muscles and fascia.

And this process of shortening and tightening that causes pain is, most often,  due to a perfect storm of postural and incorrect muscle recruitment issues, combined with the mental factors of stress, frustration, and anger which themselves tighten and shorten our muscles via the sympathetic nervous system drive, called the fight or flight response

The best way to bring these muscles and fascia back to homeostasis, which means allowing them to loosen and return to their normal length, is by releasing or de-activating the trigger points and motor points. This causes the characteristic twitch of the muscular spindle and associated muscle lengthening. New blood flows in and washes away cellular toxins and the muscles and fascia lengthen relieving pressure on the joints, tendons and ligament.

But at the same time we treat human beings with pain and disease, we do not treat pain and disease in a test tube or inanimate object. As the mind leads the Qi, it is often the case that the stagnation of Qi and Blood that leads to pain is itself the result of the action of the nervous system or mind, so that the most elegant, safe and effective therapy is one that addresses the cause as well as the symptoms.

In the photo above you will see a selection of acupuncture and dry needling points that were done on a young male hi-tech engineer for the relief of dizziness, vertigo, nausea, headache, and neck pain due to strain from work, immigration, and  family issues.

This was a married man whose wife and small child were back in his home country for six months visiting family. In the sweetest way he described how much he missed them. At the same time, because his wife,  who normally did the cooking,  was out of the country, this Indian vegetarian’s diet was suffering, living on cheese sandwiches, which may also have been related to mild depression affecting self-care.

Worse, not only was this man working long hours at a hi-tech start up, AND getting an MBA at the same time, but his immigration status, getting the right kind of long term visa, was dependent on his employment. The problem was that being a Pitta dosha dominant type, he was a high achiever, and very much cared about success at work, but while the senior supervisor valued him, his immediate boss did not like him at all, and was verbally abusive.

So on top of all the other stressors, he had a hostile work environment that was making him frustrated and angry, but also creating anxiety about his immigration status.

Finally, on top of this all, he was saving for his sister’s marriage, quite common amongst Indians, but, because of his visa status might not be able to attend, which would be a huge familial let down. On top of it all, no friends, as he was new in town, and no one to talk to about such things

This patient described the sensation of feeling tight and “blocked” in his head, with some kind of buzzing in his ears, neck pain, dizziness, vertigo,  nausea, and difficulty concentrating. After performing an MRI to rule out anything ominous in the brain, this patient’s Western Bio-medicine M.D., without asking a single question about his patient’s stress levels or life, another words, without trying to treat the person, only treating the disease, prescribed 300mg of Gabapentin, an anti-convulsant medication with side affects of drowsiness, disorientation, and difficulty concentrating, and sent the man on his way, telling him “there is nothing wrong with you.”  Gabapentin only made the patient feel much worse.

Every disease has a long history. Especially when someone develops a functional disorder as an adult one must always ask, and I learned this from my wonderful teacher Alex Tiberi, may his memory be blessed, “what was going on in your life when symptoms began.”

In my patient’s case the words flowed out like a river, and more importantly, you did not need to be a genius to figure out, at a bare minimum, how anxious and frustrated he was about his symptoms, and at the same time about his life situation, especially with work.  And, oddly to me, who is on the sensitive side, he had no idea at all that he was biting off an awful lot or that he was suffering from stress, frustration, anger, anxiety, or fear.

In fact, after his first acupuncture/dry needling sessions, week of Chinese herbal medicine, Ayurvedic herbal tea, Magnesium Fumarate taken before bed, and the experience of being listened to, validated, and some help making some decisions about work, school, and immigration status vis a vis the big picture of life,  this patient was about 35% better.

After six visits he was 100% better and  looked at me at with a smile, marveling that, “sir, before I met you , I did not even know I was stressed!” You cannot treat something without identifying what it is. No amount of dry needling or acupuncture would have helped this man get all better had he not gotten a chance to identify how much emotional and physical tension he was carrying.

At the same time, making the decision with encouragement from the acupuncturist to begin practicing mediation and also doing self-oil massage, which is called oil bath in Ayurveda, were the elements of self-care he needed to calm the nervous system activation that was causing his Vertigo and Headaches.

In Ayurvedic terms we would say that he used meditation and oil bath to pacify both Vata and Pitta, the underlying cause of the problem.

You cannot cure with a pill or needle what you have created with a lifestyle. This man, the first in his family to finish high school, let alone travel to USA as an engineer, was quite used to being under enormous academic pressure.

Going to school while working was not such a big problem. What caused him to reach the tipping point was the lack of solace and companionship from his wife and young child being away, along with the worry, more exactly, the fear that all of his big plans for a green card would go belly up because of the harassment from his immediate superior at work.

At the same time clearly this was a nervous type person, very alert, very vigilant, but also very sweet. The first thing was just working out that, in fact, there were immigration alternatives even if, worst case scenario, he were fired.

Next issue was food. In Ayurveda this man suffered a major Vata elevation of nervousness, unease, and pain. Movement in the mind where there should be stillness. In Ayurveda the mind is a function of Vata. Vata is worsened with cold dry food like sandwich.

Because this guy was so used to elaborately spiced Indian food made by his spouse, he had no idea that he could just cook rice and beans and vegetables with onion and curry powder and call it a meal. This helped to pacify his Vata and build Qi and Blood

Next issue was calming the anxious mind. And that is the title of the book i recommended, by Dr. Jeffrey Brantley, M.D. I instructed him to take a meditation break every day at lunch time. And it turns out they had a “quiet room” at work for just that purpose. I also explained that he had to exercise a minimum of 3 days a week out doors in the fresh air.

Finally, because he was himself from South India where oil massage was traditionally done once per week, I instructed him on doing oil massage with medicated sesame and coconut oil to pacify his Vata and help calm the mind. He loved it, and it worked.

Treatment was based on deactivating trigger point in the attachments of the upper trapezius at the occipital bone, of the attachments of the levator scapula muscle at the transverse processes of the cervical vertebrae, of the great motor point of the Upper Trapezius that corresponds to our Gall Bladder 21 act point, releasing the para-vertebral muscles of the neck, as well as drawing the Qi away from the head by opening up the Rhomboids and Infraspinatus muscles by deactivating trigger points and motor points in those muscles

Acupuncture Points on the “Du/governing vessel” extraordinary channel was employed to open up the circulation of the Qi from the head and neck down through the spine to the cocyxx. Additionally acupuncture points were selected on the back at the Gan and Zhi Shu points to open the flow of Qi through the Liver and Kidney organ systems that govern the circulation of Qi and that pull Qi downward from the head.

Afterwards spirit calming points were employed on the front of the patients body, such as Yin Tang, and the combination of the Liver Mu points with Lung 7, LI 4, Gb 34 and Sp 6 to release pent up energy, relax the connective tissue and nourish the blood. The Dai channel opening point GB 41 was paired with TH5 to open up the Dai Mo to relax tension and draw Qi down out of the head.

Chinese Herb formula Xiao Chai Hu Tang, called Minor Bupleurum combination was given at 3 capsules twice daily to open up the flow of Qi in the liver channel, as the patient had a very bowstring pulse, the standard for Liver Depression Qi Stagnation, and also expressed a lot of anger about his work and school situation. as also a course of Magnesium Fumarate.

This man felt immediate improvement by the end of his first treatment and all symptoms were gone after 6 treatments. This is a perfect example of how recognizing that the mind leads the Qi both positively and pathologically, can lead to a more accurate and sophisticated treatment.

By listening to the patient and allowing him to express his anxieties and frustrations, he became conscious of how his lifestyle (over-scheduled, working 60 hour weeks while attending school at night; lack of exercise or self care, excessive frustration and anxiety) was making him sick.

What’s remarkable, yet common, is that even with all his symptoms he was not able to identify that he was suffering from too many stressors all at once, without an adequate coping response. This is not his fault. We live in one of the cultures in the modern world that considers high levels of stress normal.

Once this kind young man because aware of the problem he was able to take remedies to fix it–more home cooking, daily meditation, Ayurvedic oil bath, acupuncture, dry needling, and Chinese herbal medicine, and, key point, his wife and child returned from India, so he again had some regular emotional support.