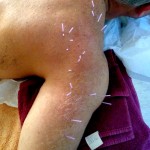 I am reprinting this article on Trigger Point Acupuncture and Dry Needling that I wrote back in 2009, for my friend Anthony Carey, the owner of Function First here in San Diego.

Function First is a system of corrective exercises first developed by Pete Egoscue, (The Egoscue Method) and later refined by Anthony, whose goal is to activate tight, shortened muscle that have become that way from disuse. Function First is an excellent addition to dry needling, and gives you methods you won’t get from Physical Therapy.

Muscles move bones. That is there job. Fascia is a network of connective tissue that help muscles do their job through the web effect. Muscles begin and end from point A on bone A to point B on point B, like a lever system. But the fascia does two things.

Fascia assists the contraction of muscles at the micro level. But what is really interesting, is that the fascia extends over multiple muscles and bones, so that the fascia that originates on your jaw, can extend all the way to the tips of your fingers.

This is great, because it explains, in part, who the mammalian body perform such complex movements. The fascia is a complex communication system between and within muscles. This is now called Fascial Trains.

So normally this is all fine. You pick up a spoon and put it down again, alles cool. But the Trigger Point problem arises when muscles and fascia are in a state of constant contraction, either from

When muscles and fascia dont get a chance to return to normal, then the latent Trigger Points we all have, get “activated.”  Now inflammation develops in specific locations, the Trigger Points, and with that inflammation, comes pain.

Trigger points can also develop suddenly, for example such as with a sudden overexertion like lifting a 75lb planter in the garden, or during the BUDS program for Navy Seal hopefuls.

So shortened tight muscles both make you susceptible to Trigger Points and and can be the proximal cause of both chronic and acute TrPs.

Muscular contraction of muscles and fascia occurs when our brains send messages via the motor nerves of the body to contract.

The junction of nerve to muscle is called a motor point. Motor points, and their related tissues trigger points, are responsible for much chronic pain.

Stress, repetitive use, overuse, and trauma can each cause our latent trigger points to activate which in turn makes our muscles and fascia to shorten. Shortened muscles and fascia are associated with active painful inflamed Trigger Points and ropey fibers, such as many of us feel at the top of our shoulder/upper trapezius/traps.

When I do Dry Needling or Trigger Point Acupuncture, I insert a 30 or 32 or 34 guage dry needle into the motor point of the targeted muscle and fascia. Often there are multiple muscle involved. That in turn tells the muscles and fascia to return to normal legnth. That feels really good, everything feels looser, though you can be sore, like a post workout soreness.

At the same time I palpate (feel) around you muscles for exquisite tender points. Often, you have already identified them for me, and I may have marked them with a surgical marker. Often, too, I can locate points you did not know were there.

Patients sometimes joke when i find those very sore points—“oh, it hurts, so you are going to put a needle in it?” Exactly right!

And now selections from my old article, reprinted from the Function First archives, from July, 2009

Trigger points are foci of neural hyperactivity in the various structures– fascia, muscles, tendons, and ligaments– that form the musculoskeletal system. They were first described by Western Medicine in England in the late 1930’s. Chinese Medicine and Acupuncture theory described them in the 2nd Century B.C.E. with less physiological detail, as “Ah Shi” Points…The Chinese indeed were describing Trigger Points.

How Trigger Points Relate to Pain

At London’s University College Medical School researchers discovered that referred pain from a focus of irritation in muscle and or other connective tissues or fascia may be felt in broad, diffuse, and specific areas, such as muscles, joints and even teeth. (Trigger points occur, most often, in the thick portion of muscle bellies, particularly in the region of the motor point, but are also found in their origin and insertion.)

This was significant, as pain from these foci of irritation did not and do not follow the dermatomal or nerve root distribution of neurological pain common to actual nerve injury, such as Sciatic Pain.  In fact, it was demonstrated by Drs. Good, Kelly, and Travel, in England, Australia, and the U.S., that each individual muscle in the body, when affected by these “irritant foci”, has its own unique and specific pattern of pain referral that is predictable and mapable.

The Development of the Term Dry Needle and Dry Needling

England vs. ChinaThe innovative research and clinical physicians doing this work also discovered that it is possible to “de-activate” these acutely tender points, and the horrific pain patterns they refer to, by, the insertion of a needle.

Now its also true that the Chinese already knew this and had been doing it for a couple thousand years. Every martial arts dojo master also did acupuncture, and in ancient times with damn thick needles! And they were dry.

At first these Western Med docs did injections with “wet needles. What they did was injection lidocaine, just like your dentist does, in the TrPs with hypodermic needles. They reasoned, if it works to numb nerves, won’t it work to deactivate TrPs.

It did. But fast forward to the 60s, if I recall correctly, and a study was done in the UK to determine, is it the Lidocaine, or the Needle. And it was the needle. MDs at the time coined the term Dry Needling, and eventually began to use acupuncture needles, as more and more of them traveled to and studyed acupuncture in China and Sri Lanka.

The Wide Application of Dry Needling and Manual Therapies

In the process they found they could relieve the pain and inflammation that is common to sports injuries, degenerative pain like arthritis, or painful conditions such as headache or TMJ.

And this is why manual therapies, from Feldenkrais to Deep Tissue Massage to Function First and Egoscue Method can be such great adjuncts for the Dry Needle treatment. Sometimes they even address the cause more than we can.

In California only Licensed Acupuncturists and MDs are permitted by law to do dry needling. This is because untill very recently the Chiropractor or Physical Therapists license did not allow them to penetrate the skin in any way. Not needles not surgery. That was for nurses, phlebotomists, MDs, and acupuncturists.

Why Physical Therapists Can Do Dry Needling and Not Acupuncture

When Acupuncture spread like a 20 year wildfire in USA, it was quite natural for PTs to want to learn and practice acupuncture. But having already spent 3 years after high school learning Physical Therapy, most of them did not want to have to study more.

There was a fight, b/c Acupuncturists, who need a minimum of 6 years trainig to get licensed, felt that PTs should learn it properly to practice. In some states like Colorado, Maryland, and Arizona, PTs got around that by getting “dry needling” but not acupuncture included in their license. I have no issue with it. I do have an issue with PTs acting like they invented it, or that acupuncturists who have been doing dry needling for 30 years, dont do “dry needling.” Its a term, not a method.

The Simple Difference Between Classical Acupuncture and Dry Needling

All acupuncturists do some kind of “dry needling” in that they put dry needling in the body. But the majority of acupuncturists, even ones that treat pain and sports injuries, do Classical Acupuncture. They locate their points based on Chinese Medical theory and the channel system of Qi stasis. They may or may not know their western anatomy that well, and usually have not studied trigger points. Many have though.

If an acupuncturist or physical therapist does Dry Needling, it should mean they have an extensive knowledge of western based anatomy and kineseology. They should understand the fascia….And they should have advanced study in the identification and location of trigger points and motor point. They should also know HOW TO needle them..

That can be a difference between someone who has needled thousands of patients over 30 plus years, and someone just out of PT school who took a weekend course on dry needling. The proof is in the needling skill.

I very rarely brag, I actually hate it. But I do have folk who drive from Phoenix and Tuscon to San Diego who already get dry needling with a Chiropractor and a physical therapist there, whose treatments are less thorough or effective.

For more on the difference between Classical Chinese Acupuncture and Dry Needling today, see https://bodymindwellnesscenter.com/difference-between-dry-needling-and-acupuncture/