Is Breast-Feeding Really Better? or, “To breast-feed or not to breast-feed, is that even a question?” 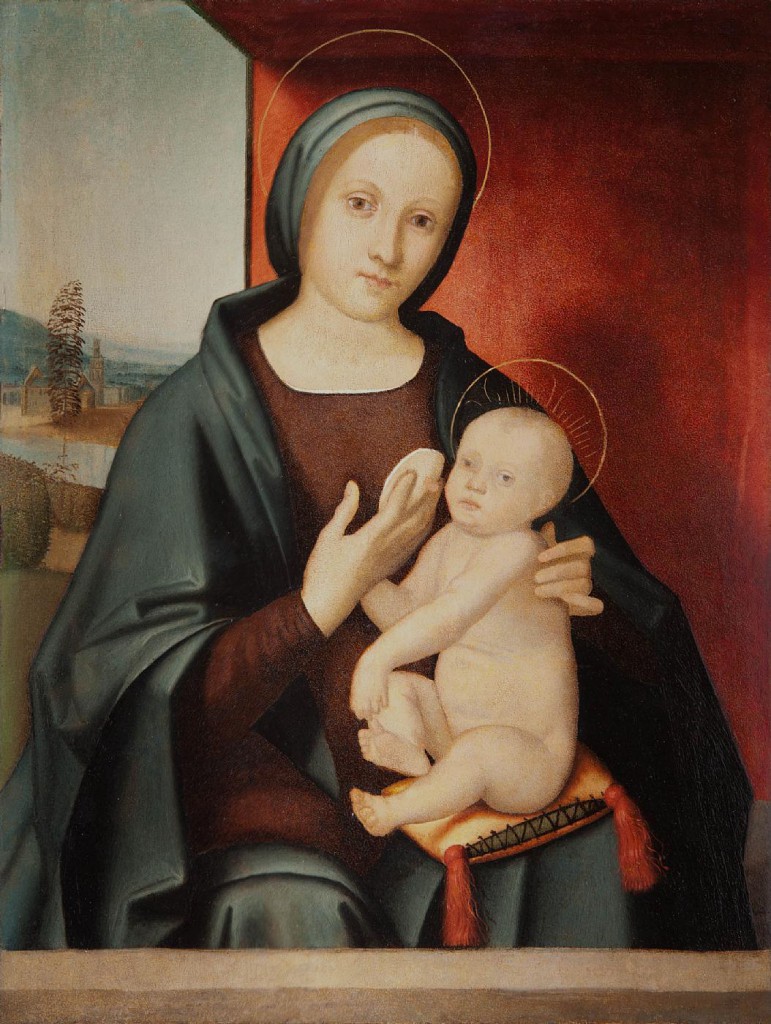 Besides the obvious emotional factors, in which the baby gets to feel and smell and taste her mother in moments of such closeness they were used in Renaissance Art in Italy as one of the preferred ways of showing the Christian Diety, Joshua of Nazareth, as a suckling infant, Madonna with Child (note: the mother in this depiction comes before the infant),   besides all that psychological stuff that, even without Freud, but with common sense  it seems obvious could contribute to creating a foundation of emotional security for children (note: the #1 prescription of pharmaceutical drugs in the USA is for Anxiety Disorders), besides all that, there are well established medical benefits to the nascent immune system involving the passing of IgA secretory antibodies with the passage of milk and love from mother to child.  And breast feeding is also good for women’s breasts themselves, in terms of what Chinese Medicine describes as the circulation of the Liver Qi which, if you follow the Acupuncture channels, flows into the breast, along with the stomach channels.

It could be noted here, too that it is now known that vaginal birth (as opposed to caeserean,–which is  performed in the USA five times more often than in Europe,  and unnecessarily so,  in no small measure to suit the convenience of M.D.s schedules; to accomodate the loss of manual skills on the part of Oby/Gyn medical doctors whose jobs in the last half century have grown to  involve a million things other than the actual delivery  of children; vs. midwives, whose primary work is to deliver baby’s safely;  and possibly for the profit motive of doctors and hospitals) also confers advantages to the digestive system of infants via small amounts of the mother’s e-coli that are ingested during birth.

Now comes this study, reported today, March 4, 2014,  in the Well section of our New York Times that purports to assert that the benefits of breast feeding vs. bottle are a function of higher socio-economic class, rather than the breast milk itself. Interestingly, in this study of discordant siblings, one got the breast, the other the bottle, for reasons undetermined, what was looked at was test scores in later years for body mass index, obesity, asthma, hyperactivity, reading comprehension, math ability and memory-based intelligence. Did they test anything about the immune system, which is the primary claim made as to breast milk’s benefit? No. Did they test for anxiety or self-described happiness and sense of security? No.

Should you feel guilty if you cannot breast feed for some reason? Absolutely not. There are some babies that just can’t latch, also.

Can you compensate with other forms of maternal and paternal love? Of course you can. Breast feeding is the beginning, not the end of maternal love. Its only that of you can breast feed, why not? And for years the corporate medical establishment comprising cozy relationships between the Formula and Drug companies and M.D.s, along with cultural biases towards “modernity” and “progress” led women to abandon the breast as the lactation organ Nature or God designed it to be, and, also, as a result of the power of the fashion industry and Hollywood and now pornography, that creates an obsession with the breast as a secondary marker of gender and sexuality. What irks me in particular is that this most supremely sacred and clean event, the feeding of a baby with mother’s milk, is seen as “gross” and even “obscene” if done in public, in a society that so openly and shamelessly objectifies women’s body’s and even sexualizes the bodies of children (look at the adds for Calvin Klein jeans for pre-adolscents, for example). In fact Facebook has even banned photos of women breast feeding. Yes, its that bad. Is it misogyny or just the degree to which modern Americans are divorced from all things natural, like the stars, the seasons, where our food comes from, where baby’s milk comes from, how to live in our body’s naturally, even what natural fragrances smell like, (vs. the synthetic perfumes that are endemic to modern life).

Here is my quick response:

Key Point: “Now a new study.” Right. A Single Study as we know from science has the potential, if it is a well designed and  well executed one, to raise questions, but proves nothing. Especially in the light of the countless studies that show the benefits of breast feeding when you can. Should you feel guilty if you can’t? No. Of course not. But then guilt is normal for humans (and other higher mammals), so we are built for it. Then guilt and shame are also one of the methods of control in religious hierarchies.

But if you can’t breast feed, at least, if you can afford it, BUY BREAST MILK. Also, what is wrong here is that children in the developing world die from formula mixed with filthy water.

Key point 3. Who paid for this study? Was it Nestle or one of the other big formula manufacturers. Remember the studies that showed smoking is harmless?

Also, in my experience, women who have milk but can’t let down can learn how through mindfulness meditation. Its a function of a discordant nervous system that can be retrained. Hormonal release is dictated  by the nervous system; if you are locked into the fight, flight, or freeze response, the stress response, through learned nervousness and fear (anxiety), you can learn, through Mindfulness Meditation, how to retrain your nervous system into the relaxation response.

In my San Diego Acupuncture, Chinese Medicine, and Ayurveda practice, that is just what I recommend, and have seen great results. It involves empowering human beings to make their health their own creation with the tools no one ever gave us before. There is a reason there is so much money spent on drugs for Anxiety and Depression in this nation. Lots of reasons, actually, that i wont go into here. But the way to undo the madness is to learn how to retrain your nervous system, your mind, and even your heart. Mindfulness Meditation is one of those tools.